Being "Not That" Asian 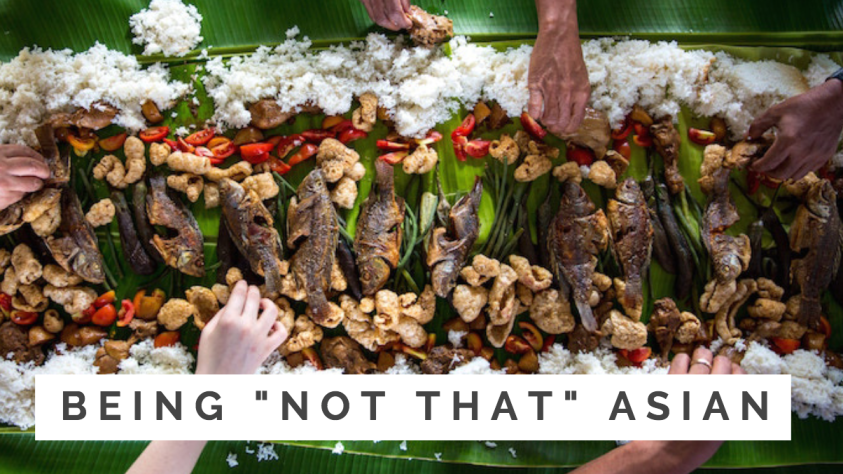 Today, we’re going to have a coffee break together and chat about identity. This summer, I read this Huffington Post article entitled The Asian-American Awakening: That Moment When You Realize You’re Not White and it sent me on a train of thoughts about my own journey as an Asian-American woman. I don’t have the exact same experience as the writer, but a lot of themes spoke to me. Ingrid Nilsen also has a video that talks about her identity as a Thai+Norwegian woman. She addresses how she didn’t realize she was “different” until she started school and noticed her packed lunch food was different than everyone else’s.

A little about me. I’m Filipina. I haven’t done a 23andMe but I’m pretty sure I’m at minimum 90%. Maybe there’s some Spanish in there from the time they colonized the Philippines. I was also born in the Puerto Rico, which means I am a citizen of the United States of America. Growing up in a beachside town in Florida, I never thought I was in a place that wasn’t diverse. I wasn’t the only Asian in my classes, but still was used to getting questions like, “What are you?” I don’t recall ever really thinking whether I looked different than anyone else, or was treated differently because of my skin color. In reference to the article, it would be an exaggeration to say that I felt “trapped in two worlds”.

That being said, I recognize that I express or hold back certain parts of myself depending on the dominant culture around me, either majority Filipino or non-Filipino. There's even a middle tier of majority Asian/non-Filipino. When I’m around Filipino’s, I can “turn it on”. It’s like riding a bike. I know what to eat, how to eat it. I address my elders as “Ate/Kuya”, or “Tita/Tito”, or “Lola/Lolo”. I greet others by kissing cheeks.

I’m also citizen of the United States of America. If I go to the Philippines now, it is distinctly obvious that I’m a tourist despite looking generally like everyone else. I grew up in the USA and who I am is a direct result of the influence and culture in this country - for better or for worse.

None of this code-switching is an act, but rather an automated assimilation of what is around me. Sometimes I wonder, has it been my choice to do that or am I inherently trying to blend in? And is that a bad thing?

This brings me to where I place myself on the Asian-American spectrum, and whether that even exists. To do that, we explore the ever politically correct stereotypes. With a quick Google search of “Asian stereotypes” an article from the Odyssey was first on the results list. It shares the 10 most common Asian stereotypes. To summarize: Asians have yellow skin, are all the same, have slanted eyes, are smart, eat dogs, have karate in their genetics, get asked where they’re from, only date other Asians, can’t drive, and always get A’s.

There are multiple ways I don’t adhere to the Asian stereotypes. Whether I agree with the ones listed in the Odyssey article or not, they are stereotypes birthed out of truth from a subset of Asians and perpetuated by media, entertainment, and direct exposure to certain cultures.

There are also a number of stereotypes that do apply to me. However, because I don’t fit into ALL of the stereotypes, I still say things like, “I’m not that Asian”. As if only having 6 out of 10 (for example) of the aforementioned list apply to me puts me at only 60% Asian.

When I first said it to my boyfriend he was confused. I am Filipina. Which is in Asia. He challenged how it could possibly be a spectrum. When explaining why I claim to be “not that” Asian, I describe the traits above where I don’t fit the stereotypes and immediately realized I help perpetuate them by doing that. Talk about some foot-in-mouth syndrome.

His challenge got me asking myself why I say I’m “not that” Asian in the first place. My current theory is that I don’t want to be placed in the stereotype bucket of Asian. And why not? Because I want someone to get to know me as an individual and not a certain way “because of” my Asian-ness. I don’t want the fact that my skin is brown and I’m Asian that you automatically think I’m smart, because you’ll probably be disappointed. I don’t want you to think that I eat only weird (well, weird to some) food and don’t LOVE Taco Bell Crunchwrap Supremes like a true American. I don’t want to have to contradict or confirm anyone’s inherent bias due to my appearance. I want to define who I am on my own terms and let that be known.

It's taken time to find the words to articulate what I've shared so far. As I searched for the words to explain, I also came to mental tools for shifting my approach to the Asian part of my identity. I don’t need to actively push away the stereotypes that apply to me in hopes to deter my other traits from being overlooked. If they are overlooked, that is not my problem - it’s the overlookers’. The bottom line is, I’m Asian. I’m Filipina. I’m American. My identity includes traits from the household I grew up in and the world around me. And that’s okay. In fact, there’s no need to qualify it as okay or not okay - it just IS. I need to stop apologizing (implicitly or explicitly) for my tendencies just because it’s the minority trait. I’m proud of how I was raised and the culture I grew up in, and I’ve never been ashamed of it. Nor do I ever plan to be. As the Huffington Post article proclaims, there is an “Asian-American” blend with its own individualities that does not require betrayal or denial of one part or the other.

When I have kids, I want them to address their elders the way I was raised to. I want them to grow up with the Filipino dishes I grew up with (granted, I should learn how to cook them first). But I also want them to embrace the wonders of being an American and all of its opportunity.

Until that happens, it’s time to live by example.

Biggest Myths of Your 20's to Unlearn